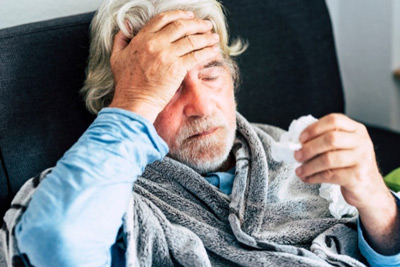 Why bring up influenza when we are still grappling with the lingering effects of COVID-19? One of the reasons is the potential seriousness of this seasonal viral infection – something that is easy to forget when COVID-19 is still with us.

The Center for Disease Control reported an estimated 38 million cases during the 2019-2020 flu season resulting in 22,000 deaths of which upwards of ~ 400 were in children  (see 2020 Pediatric Flu Deaths ). There were also ~400,000 flu-related hospitalizations among adults, including pregnant women (who are at an increased risk for flu-related hospitalization and complications). Because of masking and other mitigation measures used to prevent COVID-19 infections, the last two flu seasons (2020-2021 and 2021-22) were less severe – people were just not being exposed to the flu. Now, as we gather together more frequently without masks or social distancing, there will be more individuals likely to be exposed and come down with the flu – and, in turn, spread it to others.

This year’s flu season is already showing some concerning features. The first is its early onset; typically, we see the flu appearing around the end of December and peaking in the late winter months. This has not been the case in both the Southern Hemispheres (Australia, New Zealand, and South American countries) and now, even in our own country — particularly the southern and southwestern states). See: Early Wave of Flu Brings Early Flu Hospitalizations (cdc.gov).

Also, this season, the we are seeing the more severe viral strain, Type A predominating rather than the Type B strain. [For a quick review of the types of flu viruses, see our previous blog: “Flu Facts and Symptoms.” For a more detailed explanation see: Types of Influenza Viruses | CDC ].

The data from Chile’s recently ended flu season [see: Influenza During the Southern Hemisphere Influenza Season 2022 ] shows that country’s flu season began earlier than usual, was predominantly Type A, and was accompanied by more hospitalizations than in previous epidemics. In fact, the strain accounting for most of the reported cases of the flu in the U.S., so far, has been the same Type A as was seen in the southern hemisphere – Influenza A(H3N2) [see: Weekly U.S. Influenza Surveillance Report | CDC ].

One problem when dealing with a Type A flu is that it mutates far more easily and more often compared to the Type B variety. We certainly have seen this phenomenon with COVID-19! Also, past flu seasons starting with a Type A virus have sometimes seen a second wave of a Type B strain. That illustrates why we have been fighting off viral infections for thousands of years – they constantly adapt and change to find ways to outsmart us!

Generally, seasonal influenza vaccines are about 40-60% effective when they match the circulating strains. We now measure effectiveness more by how the vaccine keeps people who contract the flu out of the hospital rather than by preventing infection. We know that people who have received a flu shot and later contract the flu, tend to have a much milder case and far fewer complications than do those who have not received a flu shot. Based on southern hemisphere data, it appears that the current vaccine (we are using the same one as they did) had an adjusted vaccine efficacy against Influenza A(H3N2)-associated hospitalizations of ~49%. This is good number. For a more detailed explanation of vaccine effectiveness and how we come to that number see: How Flu Vaccine Effectiveness and Efficacy are Measured | CDC

Is it flu or is it COVID?

Short of testing, there are no absolute ways to distinguish between the flu and COVID-19. If you’re feeling off, get tested for both. Yes, both, because there is a possibility of having both at the same time.

Get a flu shot; here’s why

Detailing all the benefits of getting a flu shot would consume more space than a regular blog post allows. Instead, for an exhaustive list of benefits, see: Vaccine Effectiveness: How Well Do Flu Vaccines Work? | CDC in the section titled “What are the benefits of flu vaccination?”

Before we end this blog, let me separate some fact from fiction:

So, the bottom line is: if you are six months of age or older, get your flu shot and get it now!

Remember, Truesdale Health’s providers are here to help you with all of your medical needs!