Which COVID-19 Vaccine Should I Get?

Which COVID-19 Vaccine Should I Get? 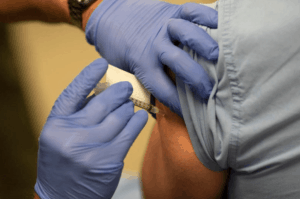 The short answer: “The one you can get tomorrow, not weeks from now.”

The SARS CoV-2 virus (commonly called COVID-19) is a coronavirus that is sphere-shaped, contains only ribonucleic acid (RNA) and is covered by spikes that resemble a “corona” (Spanish for crown). These spikes consist of three protein strands that wrap around each other and end in a slightly flattened ball shape. Picture a tree made of three intertwined trunks ending in a large canopy. The spikes help the virus attach to and enter into cells where it replicates. Our immune system responds by making antibodies and priming other immune system cells to destroy invading viral cells.

RNA viruses employ a clever survival tactic – they reproduce very quickly, but lacking the “mistake-correcting” machinery of DNA viruses, they are prone to errors when replicating. Errors increase the likelihood of mutations, which can sometimes present an advantage for a virus. A mutation or “variation” can make the virus more infectious, more lethal, or more resistant to responses from the body’s immune system. This is why it is so important to limit the spread of the COVID-19 virus so as to lessen the chances that new mutations will arise as it spreads from person to person.

Vaccines developers must take all of this into account.

A dramatic battle at the cellular level
Viruses are intent on invading the body’s cells, taking over their machinery and reproducing.
While invading COVID-19 viruses may remain attached to the exterior of the human cells that they target, they aim to penetrate the cells to replicate by the thousands. Overloaded cells then break open and release the thousands of copies into the bloodstream.

Broadly, vaccines work by “priming” and activating the immune system to make antibodies and other immune cells that attack, in this case, the virus’ spike protein. This is currently achieved (depending on the vaccine) in one or two doses. It is the immune system that actually kills invading viruses by generating antibodies, memory cells, helper cells and other defenders.

Note that virus mutations or variants can affect the immune system’s effectiveness. Thankfully, none of the variants identified to date have fully eluded the “primed” immune system that results from the current vaccines. Because of its fragility and short life span, messenger RNA vaccines must be kept frozen and handled carefully; hence the special storage and transport requirements of the Pfizer and Moderna vaccines.

Vaccines activate the body’s natural defense system in a number of different ways.
Vaccine type one. Pfizer and Moderna created vaccines built on a “messenger RNA platform.” Their vaccines consist of a small strand of artificially produced messenger RNA that is coded for COVID-19’s spike protein and is encased by fatty acid globules. The globules enhance the ability of the messenger RNA strands to get into human muscle cells (where the injection is given). Once in, the messenger RNA is unsheathed and the protein-producing machinery of the cell takes it up. Copies of the spike protein are made by the thousands. After a very short time, the messenger RNA in the cell breaks down since it is so fragile. The newly made spikes are then released where the immune system now “sees” them and responds. The messenger RNA never enters the nucleus of the cell where DNA resides and is not incorporated into the DNA of the cell.

Vaccine type two. Some vaccine developers have inserted a spike protein gene onto the DNA of a virus and also modified the virus so that only the spike protein can be made, and not the virus that carries it. When the virus enters a host cell, it releases its DNA, which then travels to the cell’s nucleus. From there, messenger RNA is made from the viable/readable strand of DNA that contains the instructions for making a spike protein. The messenger RNA leaves the nucleus and enters the protein-producing factories of the cell with the same result as seen with the messenger RNA vaccines. The virus’ DNA is not incorporated into the human cell’s DNA; it breaks down and when the infected cell breaks open to release virus spikes, it is destroyed. Examples of this type of vaccine come from Johnson & Johnson’s, AstraZeneca/Oxford as well as from Russian and Chinese companies.

Vaccine type three. The third major strategy for activating the immune system to recognize and attack Covid-19’s spike protein is to create a vaccine made of purified virus spikes. This is done by placing spike-producing genes inside yeast or other cells that then produce copies of the spike protein which are then harvested and purified to make a vaccine. The purified spike proteins are then injected into the body. Novavax has been working on this type of vaccine.

One dose, two doses?
One or two is a matter of achieving the highest effectiveness of the type of vaccine approach taken. Testing on the first vaccines from Pfizer and Moderna proved that two doses achieved efficacies in the 95% range. This then brings us to an important point. Both the Pfizer and Moderna vaccines were tested earlier on than have the Johnson & Johnson and Novavax vaccines. So, it is difficult to compare efficacies when the two soon-to-be released vaccines are compared to the present ones. Both have been reported to have efficacies less than the 90-95% found for the Pfizer and Moderna vaccines. However, neither the Moderna nor Pfizer were initially tested against the more infectious variants.

The important point to bear in mind is that all of these vaccines have been found to prevent severe COVID-19 disease (the main reason for hospitalization) and deaths. This applies even when tested against the present “variants/mutations.” So, we really should not be comparing “efficacies” so much as the ability to prevent severe disease, hospitalization and death. From this point of view, they all seem to accomplish this goal.

So, which vaccine is best?
All of the major vaccines have proven to prevent severe disease, hospitalizations and death. They are mainly differentiated by their varying degrees of effectiveness against mild disease. Faced with the risk of getting sick unvaccinated, I recommend rolling up your sleeve and getting whichever one you can get as soon as it is possible and do not worry about one or two shots, or this brand or that one!

Afterword: If we can convert COVID-19 from a virus that results in severe disease with hospitalizations and deaths into (in the words one researcher) a “nuisance virus;” then science will have accomplished its goal. The likelihood of eliminating COVID-19 from the face of the earth may be a bit too lofty; but with effective vaccines in our toolbox, we can accomplish just as much.